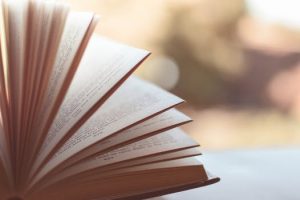 Why Marketing is like writing a novel, not a short story
There are plenty of similarities between writing a novel and a short story, but plenty of differences too. Many authors start writing short stories before they attempt their first novel, since it helps to cultivate some of those important storytelling skills, without the complexity of a longer narrative.
Where a short story is often an intense experience, a novel is more of a journey. And marketing is a journey too….

The journey
Successful novels and effective marketing strategies have two things in common: they build interest, curiosity and anticipation by taking the reader down a path full of ups and downs – twists and turns. They follow a logical sequence leading to a final climax, or in the case of marketing, to conversion. There may be subplots along the way that enrich the primary narrative, perhaps some user-generated content here, or a viral video campaign there.

By contrast, short stories tend to have focused plots, without subplots or twists. There’s less room to diverge from the primary narrative – it’s about reaching a succinct conclusion, usually following just the one character.

Length
Short stories usually fall between 1,000 to 10,000 words. Any longer, up to 20,000 words, and they would be considered novellas. Some short stories are just a few paragraphs long – less than 1,000 words and they are considered ‘flash fiction’.

A short story provides a quick burst of intense experience, then ‘poof’, you’re done. Novels, on the other hand, can be weighty. Stories can take place over the course of years, even decades. You can fall in love with the characters and become deeply invested.

While there is a place in marketing for short bursts of creativity, generally speaking, it’s best to have a long-term strategy. Ideally, you want a balance of both. Brand evangelists are born from prolonged engagement. The longer you keep them invested in your narrative, the better.

Setting
One of the main differences between novels and short stories is that while a novel may have several settings – the city streets, an abandoned warehouse, a country farm, a palace – a short story will usually have just one. Short stories also tend to cover events over a brief period of time, rather than weeks or years. There simply isn’t room to set up new places, characters and situations.

Marketing is rather like a novel in that it can take place in multiple settings – online, offline, a direct mail campaign that employs creative tactics to entice your audience, inbound, your blog, or via an eBook you’ve produced in order to set up your business as a thought leader within your field. It’ll also span a longer time period, as we’ve covered. But whatever the setting, it’s still the same story being told.

Depth
Thanks to its length, a novel has the ability to go much deeper than a short story, involving a wider range of characters, details, and points of view. Short stories, while they can have great resonance and meaning, are limited in how much they can cover. They’re all too brief to make good role models for a marketing campaign.

Why? Because marketing needs depth. It needs advanced analytics, data analysis, split testing, customer surveys, personalization. It’s not difficult, if you have the right support. Marketing only gets better when you spend time honing and refining your strategy so it has a stronger and more memorable impact on your customers. You should always be scripting your next move.

Pacing
A novel is a marathon. A short story is a sprint.

What makes a novel work is finding an idea that’s sustainable – that isn’t going to wither under the pressure of being explored at length and in depth. And of course, the longer your narrative, the more you have to think about pacing. You don’t want to rush, but you do want to keep people wanting more.

Marketing, too, is a marathon. You don’t want your audience tiring too soon. You want to pace it just right: not throwing out too many ideas at once, but also not dragging things out. Balance and variation are key – knowing when to keep things ticking along, and when to build up to a climactic event, like a product launch.

The most notable differences between writing a short story compared to a novel are scale and depth – how far you want to take readers on a given journey. Marketing, just like novel-writing, is a long-term endeavour, with secondary narratives and the occasional plot twist! So how will you ensure your audience sticks around for the ride?

Kayleigh Alexandra is a content writer for Micro Startups — a site dedicated to spreading the word about startups and small businesses of all shapes and sizes. Follow us on Twitter @getmicrostarted.

FREE 30 MINUTE WEBSITE HEALTH ASSESSMENT Are you losing web traffic or worse, even sales to competitors? Use the form below to get in touch and we'll respond to your enquiry the very next business day

We are pleased with the increasing number of people who are now visiting our website.  Your team certainly know how to get results in a very competitive industry where others have been unsuccessful.

To the team,
I just wanted to compliment you all for really making an effort under some pressure as well! My business partner Jerry and I have witnessed first hand an obvious turnaround in the number …

thanks to all the team at Firstpoint Digital.
Our business required a total re-brand and we needed to get an expert opinion and strategy structure from the outset. Our physical business now totals 10…

As you know our business has undergone a major revamp along with our branding. We were dismayed upon checking that our positions in Google had dropped off dramatically since our name change.…

As a small business, we entrusted Firstpoint Digital to give us a new website that would attract new customers who were looking for our services online or while using a mobile phone. We have noticed a…

Hi Jamie,
Since you guys setup Brand Establisher, we have seen more website visitors coming in from the extra site network now in place. We seem to get higher than usual traffic from people using a m…

>> view more
We are open from 9am to 6pm Mon-Fri.
Give us a call directly or send us a message and we will get back in touch by the next business day.

Firstpoint Digital is an online marketing business based in the South Eastern suburbs of Melbourne, Australia. We are a full service digital marketing agency with over 20 years experience and cater to small to medium sized businesses in all industries across Melbourne,


We have worked with a wide range of business owners, retailers, professional contractors and trades people. We support any business that needs a solid online presence and wants to reach their target market and audience efficiently and within budget.


We view each and every client project as if it is our own and guarantee our professional work ethic ensuring you have a committed and loyal digital marketing team on hand from the very beginning.

How to optimise your target market towards your products & services

Running a thriving business is about a lot more than just having the best prices or quality, becau

How to build your brand and earn customer trust

In a digital landscape overflowing with personal commentary, a business without a brand is